You are using a web browser that may not support the design features on this site.

For the best experience, please switch to another browser. We recommend Chrome or Firefox.

When Should Parents Expect Baby Teeth To Appear 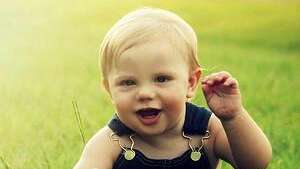 A COUPLE OF the biggest rites of passage in childhood are the first baby teeth coming in and the first adult teeth coming in. We’re here to give parents a brief guide on the general timeline to follow.

Baby teeth tend to arrive in pairs, alternating between the lower and upper arches. First up are the lower front teeth, usually between six and ten months. Next are the upper front teeth between eight and twelve months. Then come the lateral incisors, first bottom, then top. Then the first molars, then the canines, and finally the second molars.

By age three, most toddlers have all 20 of their baby teeth. A little late isn’t usually cause for concern, but we should take a look if there’s no sign of teeth by 18 months.

When Does the First Tooth Become Loose?

On average, age five or six is when kids start losing baby teeth. They might start feeling left behind by their peers if it takes longer. If they still aren’t loose by age seven, it’s time to see a dentist to discover the cause. In most cases, it’s nothing to worry about; late-blooming teeth actually tend to be more resistant to cavities than early ones!

Return to Blog Homepage
Like us on Facebook Leave a Google Review
If you have difficulty using our website, please email us or call us at (815) 623-3926